Home/Blog/31 Days of #BookLove: Day 5 – PLAYING FOR KEEPS by R.L. Mathewson
Previous Next

Today marks Day 5 of 31 Days of #BookLove. Rather than review all 300 books I’ve read this year, I decided to share one of my favorites each day this month. 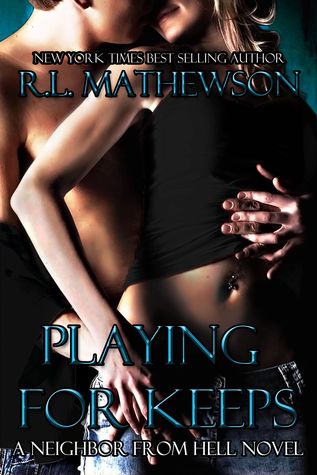 PLAYING FOR KEEPS (Neighbor from Hell #1) by R.L Mathewson

Done with being the world’s biggest pushover, Haley decides that things are going to change starting with the aggravating neighbor who has too much charm and not enough restraint. What she didn’t expect was to be sucked into his world, but Haley has a game plan and she won’t let herself forget just what the bad boy next door is capable of.

The last thing Jason expected was for his little shy neighbor to go Rambo on him over some ruined flowers. After he decides to take her under his wing he can’t help but notice that she fits very nicely in his life. Now the only thing left is to convince her that this is anything but a game.

Haley just wants to enjoy her house, but her annoying neighbor Jason makes that impossible. He’s inconsiderate, loud, and destroying her property value. Still, she puts up with it and keeps to herself until the day he dares to touch the flowers she planted between their houses. These two go head to head, and Jason decides that Haley needs to loosen up and have more fun – and he’s just the tutor to help her do it. So begins a prank war, a sleep affair, and Jason’s determination to demolish any and all food that enters his line of sight. His territorial attempts to lay claim to anything Haley cooks were hilarious. He becomes a spoiled five-year-old anytime someone threatens to touch anything he considers his. While there were things about PLAYING FOR KEEPS that I wished had been edited more carefully, I got over it – honestly, the laughs made it worth it. Yes, Jason is immature, but that’s part of his charm. And the cast of characters – especially his family and friends – were made of awesome. Just turn off your internal editor and enjoy this book for the romp that it is.

After I read PLAYING FOR KEEPS, I devoured 90% of the author’s other available titles. I really liked PERFECTION and CHECKMATE, the second and third books in the Neighbors from Hell series respectively. If you like the ensemble of characters in PLAYING FOR KEEPS, then you’ll like these too, as they include characters from that world. All of the novels can be read independently of each other.

Like the sound of PLAYING FOR KEEPS? Give the author a little #BookLove. R.L. Mathewson tweets @RLMathewson.